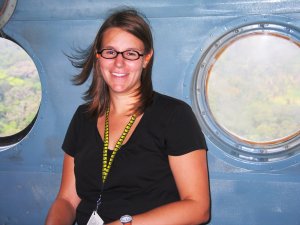 I headed up to Voinjama in Lofa County today. I’ve flown in any number of small planes, but it was my first trip in a helicopter!

You can get up to Voinjama by car, but helicopter is SO much easier. Our cars do make the trip up from Monrovia in the rainy season, but I’ve heard so many stories of huge trucks and cars getting stuck in the mud and blocking the road for hours. Doesn’t sound like a lot of fun. It’s easier in the dry season, but the dirt roads are terribly bumpy, and the trip can take anywhere between 10 and 15 hours! There has never been a paved road in all of Lofa. It’s been pretty neglected in terms of infrastructure.

The helicopter was pretty cool. It’s an old Russian MI-5 – you feel like you’re in some old war movie, and going to have to parachute out any minute. There were only 5 of us on the flight, so we had plenty of room to spread out on the bench seats that line the walls. The windows were open during the flight, which was nice and breezy but a bit rough when I couldn’t close them in time to block out the dist when we landed!

The landscape in this part of the country is amazing. It’s hard to believe anyone actually lives here – from the air it is just forests as far as the eye can see. The weather was overcast and a bit foggy, which lent a kind of ethereal air to the acacias poking out above the tops of the other trees. The rainy season here is just ending, so things are still lush and green. We’re in the northern hemisphere, just above the equator, so we are going into the drier, hotter winter months. I was surprised to see that a few of the trees had turned bright reds and oranges, and even a few that looked almost hot pink! Reminded me a bit of home.